Van Nelle Fabriek - Shafts
Van Nelle Fabriek - Building
Brief synthesis
The Van Nelle Fabriek started as a flagship of industrial Dutch architecture. The first daylight factory in Europe. A paragon of functionalism. A structure of concrete, not brick. With columns, not load-bearing walls. With its steel and glass facade and work floor bathed in ​​natural light, the building was designed to energise. In 2002, the structure was renovated and transformed into a sustainable building. Rotterdam’s national design icon was awarded UNESCO World Heritage status in 2014. The era of coffee, tea and tobacco may be over. But today, the Van Nelle Fabriek is a symbol of vitality and modernity – a legendary venue for events and presentations.
full story

Van Nellefabriek was designed and built in the 1920s on the banks of a canal in the Spaanse Polder industrial zone north-west of Rotterdam. The site is one of the icons of 20th-century industrial architecture, comprising a complex of factories, with façades consisting essentially of steel and glass, making large-scale use of the curtain wall principle. It was conceived as an ‘ideal factory’, open to the outside world, whose interior working spaces evolved according to need, and in which daylight was used to provide pleasant working conditions. It embodies the new kind of factory that became a symbol of the modernist and functionalist culture of the inter-war period and bears witness to the long commercial and industrial history of the Netherlands in the field of importation and processing of food products (coffee, tea and tobacco) from tropical countries, and their industrial processing for marketing in Europe.

In the context of industrial architecture in the first half of the 20th century, the Van Nellefabriek is an outstanding illustration of the values of relationships with the environment, the rational organisation of production flows, and dispatch via the nearby communication network, maximum admission of daylight to the internal spaces via the widespread use of a glass curtain wall with metal frames, and open interior spaces. It expresses the values of clarity, fluidity and the opening up of industry to the outside world. 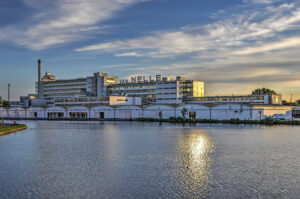 Specifications
Back to collection

The world's largest distributor of souvenir medals
Visit NationalTokens.com Be the first to know about new medals & collections